Washington, D.C. — This morning, in recognition of Tax Day, Not One Penny unveiled a new ad on the full back page of the Capitol Hill newspaper Roll Call, exposing Republican Members of Congress who sit on the tax-writing House Ways and Means Committee and who profited from the TrumpTax at the expense of the middle class. 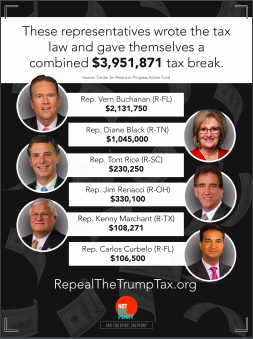 The numbers are based on a recent study by the Center for American Progress, that details how the Republican politicians wrote the tax bill to line their own pockets at the expense of working families.

“Last December, congressional Republicans rammed through a bill to give tax breaks to the wealthiest Americans at the expense of working families,” said Not One Penny Spokesperson Tim Hogan. “The powerful House Ways and Means Committee is the chief tax-writing committee in Congress, and working families deserve to know why these Republican Members of Congress, who sit on that committee, are set to pocket nearly $4 million from the tax bill. This reeks of corruption.”

The new analysis by the Center for American Progress Action Fund (CAPAF) reveals that many Members of Congress who promoted and voted for the tax bill stand to benefit substantially from the passthrough tax break. Meanwhile, the Tax Policy Center found that 92 million middle-income families across America will pay more in taxes, while the richest 0.1 percent will get a nearly $150,000 tax break with the TrumpTax. Millions will also see a 10 percent increase in health insurance premiums and our commitment to Medicare, Medicaid, and Social Security will be undermined.

Below are the amounts that each of the six Republicans earned in tax breaks: